This Chinese cucumber salad features cool cucumbers the perfect foil to cool you down on hot days or to combat the heat from a curry.

The toasted white sesame seeds add an intense sweet nutty taste while the black have a slightly bitter, earthier taste. Together they create a wonderful fusion of flavour as well as crunch.

What's the Best Cucumber to Use?

In this Chinese cucumber salad, both short or long cucumber varieties work just as well.

The shorter varieties (Persian, Lebanese) are dense with hardly any seeds and have a fresh more intense flavour.

The longer varieties (telegraph, continental, English or hothouse) are crunchier with quite a few watery seeds in the middle.

It is entirely up to you which you prefer and in any case, we will be removing all the seeds as they contain a lot of moisture - we don’t want to water down the beautiful flavours in our vinaigrette!

How to make Chinese Cucumber Salad

1TOAST YOUR SEEDS
Preheat your oven to 1800C (3600F).
Line a baking tray and pour over a thin layer of your white sesame seeds on your tray.
Place in the middle section of your oven checking them every 5 minutes and shaking the tray so they will toast evenly then cook until golden brown (approximately 10-15 minutes) then transfer them to a cold plate to stop the cooking process.
Alternatively, you can place your sesame seeds in a hot frypan (use medium heat) and keep stirring them and once the sesame seeds start changing colour (they should be a light golden brown), immediately remove them from the stove and transfer to a cold plate to stop the cooking process.

2PREP YOUR INGREDIENTS
Wash your cucumbers, trim the tops and bottoms then cut them in half lengthwise, deseed them using a teaspoon and then slice on the diagonal. Transfer to a mixing bowl, salt and let stand for 5 minutes.  The salt makes the cucumbers tastier and gets rid of excess water, which can dilute the dressing.
Wash your green onion, trim it and then slice on the diagonal, add to your cucumbers.
Wash and trim your chilli (it is up to you if you would like to remove the seeds) and cut into a fine dice then add to your cucumbers.

3ASSEMBLE SALAD
Add all your vinaigrette ingredients to a glass jar and shake until emulsified.
Add the sesame seeds to your bowl with the cucumbers pour the vinaigrette over the salad and mix until combined, taste and adjust seasonings according to your taste.
Arrange your Chinese cucumber salad on a serving platter, scatter with Szechuan peppercorns and serve.

As an Asian style salad, it works beautifully served with anything Asian such as Chinese, Japanese, Thai or Vietnamese food. You could also serve it with simple grilled or barbecued meats such as chicken, salmon or prawns.

The cool and refreshing cucumbers in this Chinese cucumber salad make it ideal to serve alongside spicy foods such as curries or hot stir-fries.

Try some more of our cucumber salad recipes... 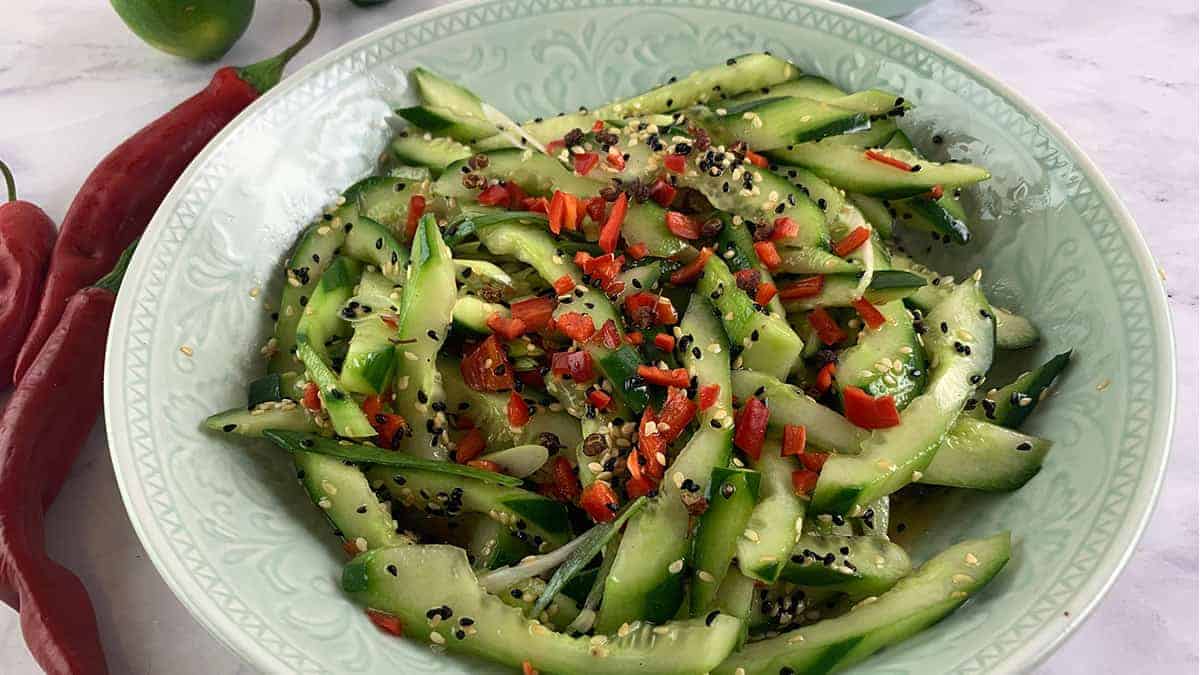 This Chinese Cucumber Salad makes the most of summer cucumbers dressed with a delightful Asian inspired dressing and sprinkled with a variety of toasted sesame seeds
Print Recipe Pin Recipe Rate this Recipe
Prep Time: 10 minutes
Cook Time: 0 minutes
Total Time: 10 minutes
* Times are an estimate and will depend on your skill level
Course: Salad
Cuisine: Chinese
Keyword: Easy
Servings: 4 as a side
Calories: 193kcal

For the salad...
For the vinaigrette...
For the garnish...
Metric - Imperial

Pin Now & Save for Later!