Our Vegan Caesar Dressing has all the hallmarks of that this classic dressing is famous with a plant-based twist.  A great dressing for many a salad.

The Origins of Caesar Salad

Caesar salad is said to have been created by restaurateur Caesar Cardini. The story goes that on a busy day at his restaurant, Cesar's kitchen supplies were so depleted that he made do with what he had available. The simple Salad was assembled at the table to give a bit more panache.

According to Caesar's daughter, the original version did not have anchovies; she attributes the slightly salty anchovy taste to the Worcestershire sauce. It was Caesar's brother Alex who added anchovies to his similar Aviators Salad that was later also named Caesar - confusing right ??‍♀️!

How we made it vegan

We have used coconut yoghurt to mimic the creaminess of the mayo, used capers for saltiness instead of the anchovies and parmesan and swapped the Dijon for some whole grain mustard for some added spiciness. The rest of the ingredients remain the same.

For an oil-free version of this dressing, you can replace the oil with tahini instead it will give you a slightly nuttier taste.

How to make it

Add all the dressing ingredients to a small food processor or blender, season with some sea salt and cracked black pepper and blitz until well combined.

Keep in a sealed container in your fridge for 3-4 days.

How long can I store it for?

You will need to keep it in a well sealed container in your fridge and it should last approximately 3-4 days.

We have used it on 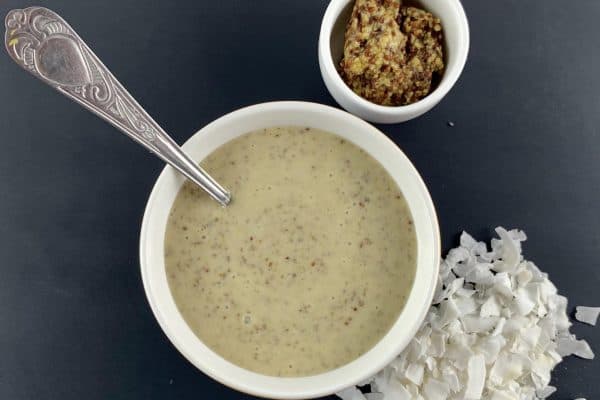 Our Vegan Caesar Dressing has all the hallmarks of that this classic dressing is famous with a plant-based twist.  A great dressing for many a salad.
Print Recipe Pin Recipe Rate this Recipe
Prep Time: 5 minutes
Cook Time: 0 minutes
Total Time: 5 minutes
* Times are an estimate and will depend on your skill level
Course: Dressings & Vinaigrettes
Cuisine: American, Australian
Keyword: dairy-free, Easy, vegan
Servings: 4 Serves*
Calories: 85kcal

This recipe makes a total of one cup of dressing enough for one salad that serves four, the nutritional information is also calculated this way.

pin me & save for Later!