This Potato Salad with Egg is substantial enough to have as a main meal and will keep you fueled and energized throughout your day.

This is a salad that I remember my Grandfather making in Crete after he had come home from his fields laden with fresh produce.

Tomatoes and cucumbers ripened under the hot sun full of flavour, aromatic parsley, farm fresh eggs combined with olives and potatoes for a satisfying salad that keeps you full for ages.

A great salad that is gluten and dairy-free and that is also suitable for Paleo eaters, it can be made vegan or vegetarian if you omit the eggs.

What are the best potatoes for this Potato Salad with Egg?

Waxy potatoes have thin skins (which makes peeling optional), the least amount of starch and retain their shape when boiled.

Floury or starchy potatoes are high in starch, low in moisture and have a floury texture with creamy white flesh.

All-purpose potatoes have a medium starch content that falls somewhere in between starchy and waxy potatoes. They have more moisture that starchy Potatoes and hold together in boiling water.

The best potatoes to use for potato salad are the waxy potato variety as they have the least starch and keep their shape when chopped and tossed in a potato salad with your dressing and other ingredients.

How to make this salad

1BOIL POTATOES & EGGS
Wash and peel the potatoes, then cut into large cubes and boil in salted water until cooked through (approximately 20-25 minutes).
Boil your eggs how you like them, then cut them into quarters, keeping one for a garnish, then keep in the fridge until you are ready to assemble the salad.

3ASSEMBLE YOUR SALAD
Place all your ingredients in a large mixing bowl, season liberally with salt and pepper, add the oil and vinegar and mix well until combined. Taste and adjust seasonings according to your taste.
Arrange your salad in a salad bowl, garnish with the last egg quarters and the extra sliced olives. Serve and enjoy!

tips for making this salad

You can also boil the potatoes whole and cut them up with their skins for a rustic version of this salad. Just make sure that you scrub them well before boiling and keep in mind that whole potatoes take longer to boil.

Add a tin of tuna or salmon for some additional protein to keep you satisfied for even longer.

Try it with some capers or caperberries for an extra bit of briny saltiness.

Can I make this salad ahead?

You can prepare this salad a day ahead by boiling the potatoes and the eggs and by making the dressing in a glass jar, storing everything covered in your fridge until you are ready to assemble it.

This salad tastes just as good if not better the next day as the flavour has been allowed to develop and mature overnight.

A great salad for your lunchbox or a picnic provided you keep it cold. 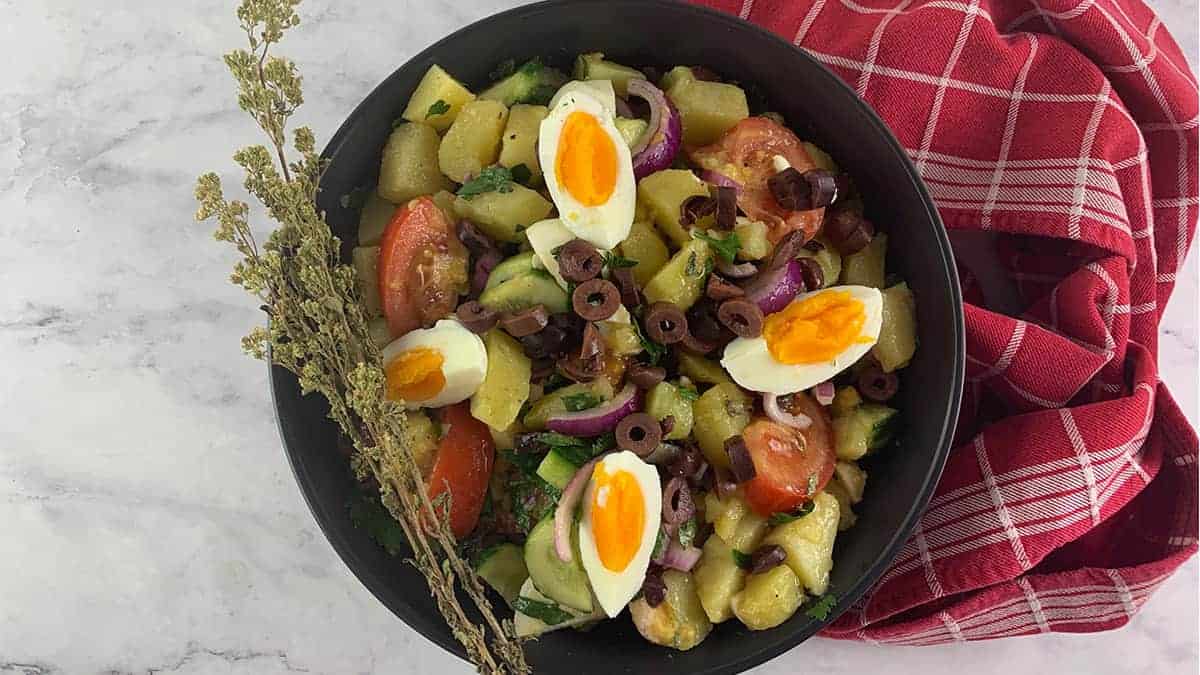 Potato Salad with Egg– a meal in itself

This Greek Potato Salad Recipe comes from my Grandfather, it is basically a Greek salad with the addition of boiled eggs and potatoes.
Print Recipe Pin Recipe Rate this Recipe
Prep Time: 10 minutes
Cook Time: 25 minutes
Total Time: 35 minutes
* Times are an estimate and will depend on your skill level
Course: Salad
Cuisine: Greek
Keyword: Easy, Intermediate
Servings: 4 as a main
Calories: 462kcal