Kale Fatoush Salad is our superfood version of this traditional Middle Eastern favourite bursting with nutrients and so satisfying it will keep you going all day long.

We have a little problem in our family, half love onions the other half can’t stand to even have an onion touching their food.

Which was a problem when it came to making this salad as I don’t think fatoush really tastes like fatoush without the spicy bite that comes from adding this pungent allium to this salad.

How to get around this dilemma - I served the onions on the side and kept everyone happy.

This fatoush salad pairs well with most meals, particularly with anything Middle Eastern, such as kebabs, falafels or spicy chicken. But I just love serving this salad at our big family barbecues as it is so easy to make a huge batch and leave it in the fridge until you are ready to serve. Leftovers are never a problem as it keeps so well and can be enjoyed throughout the week.

Traditional fatoush was a delicious way to use up leftover pita bread; it is made with chopped romaine/cos lettuce, tomatoes, cucumbers, radishes, onions, herbs and fried bread which are all dressed in olive oil, lemon dressing with some sumac added.

Our version replaces the lettuce with nutrient-dense kale, and we bake the bread in the oven until golden brown instead of frying it.

How to make it a traditional Fatoush Salad

To make a traditional fatoush, all you have to do is replace the kale with one medium-sized cos/romaine lettuce and fry your pita in some olive oil.

Do I need to add the sumac?

Sumac is a dark purple Middle Eastern spice that has a tangy lemony taste that is less tart than lemon juice.

You should be able to find it in the spice section of most supermarkets but can be substituted in this fatoush recipe with the zest of one medium-sized lemon.

How to make fatoush

1GRILL PITA AND VINAIGRETTE
Heat your grill and place the pita bread underneath until golden brown on each side. Approximately 2-3 minutes each side. When done, leave on the side to cool.
To fry the pita for traditional fatoush - heat some olive oil in a large pan, tear the pita bread into bite-sized pieces and fry until golden brown, add some sea salt, black pepper and some sumac while it is frying for an additional hit of flavour.
Place all the vinaigrette ingredients in a glass jar, season with some salt and pepper then shake until emulsified.

2PREPARE KALE
Carefully wash the kale to remove any dirt. Remove the stems from the kale and discard them. Shred the kale thinly, then transfer to a mixing bowl, pour the vinaigrette over the kale and massage for at least three minutes.

3CUT VEGETABLES
Rinse your vegetables well under cold running water and pat them dry.
Cut your mini Romas in half, trim your radishes and slice thinly (mandoline/v-slicers are great for this).
Trim and peel your cucumber leaving alternative green strips then cut into half-moons.
Remove the core and seeds from the red capsicum (pepper) and chop into small dice.
Trim your onion, remove the papery skin and chop into small dice.
Add all the chopped vegetables to your kale.

5ASSEMBLE SALAD
In your bowl with your kale, veg, and herbs season with some salt and pepper, sprinkle some additional sumac on top and toss until everything is well combined. Taste and adjust seasonings according to your taste.
Keep your salad in the fridge until you are ready to serve then, just before serving, snap the pita bread into medium-sized pieces and stir through your salad, reserving a few pieces for a garnish.
Arrange the salad in a large salad bowl, scatter the reserved pita on top. Serve and enjoy!.

Some Tips and Food prep Ideas for Fatoush This kale fattoush salad is a healthier version than the traditional middle eastern version made with cos lettuce. The peppery radishes, sweet tomatoes, and aromatic herbs work perfectly with the kale.
Print Recipe Pin Recipe Rate this Recipe
Prep Time: 15 minutes
Cook Time: 5 minutes
Total Time: 20 minutes
* Times are an estimate and will depend on your skill level
Course: Salad
Cuisine: Middle Eastern
Keyword: Easy, vegan, vegetarian
Servings: 6 as a side
Calories: 190kcal
Author: Anastasia

For the salad...
For the vinaigrette…
Metric - Imperial

To make the pita and vinaigrette...
Prep your vegetables...
Putting it all together... 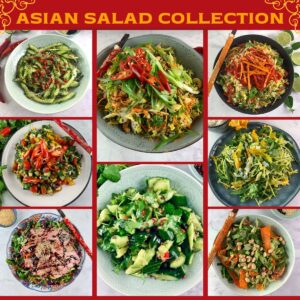